This is a quote by David Mitchell from an article about David Cameron. It’s not the main point of the article or anything, but I really like it:

“…a microscopic speck of thought, like an infant universe, that can suddenly expand at frightening speed into a fully formed request for a biscuit…”

This is the mechanism for new project ideas, in many different kinds of jobs. Someone senior has the microscopic speck of thought, and before you know it, there is the request for a biscuit, and nothing can stop that biscuit being delivered. It could be a bad idea or a good one, but it already has its own momentum.

Maybe this is a job for catwigs.

Radiodan is an Open Source (software and hardware) internet radio platform based around a Raspberry Pi. It was made in BBC Research and Development in the “Device Futures” Team. Dan Nuttall, Andrew Nicolaou and I worked on Radiodan with help from other colleagues, particularly Joanne Moore, Andrew Wood, Chris Needham, and Tim Broom.

Andrew and Dan are leaving the BBC at the end of this week, so now seems like an excellent time to reflect on what it was for and how it was useful.

Our work on Radiodan over the last two years was a two-pronged approach to understanding possible futures for radio. One prong was structured conversations with people about what they wanted from radio. The other was a prototype-led investigation into how to make a radio: what the architecture would look like, how it might be controlled, whether it would work, and how much it would cost to make.

“Expanding the Overton window for Radios” is an analogy too far, probably, but here goes anyway.

At Bristol Hackspace we started getting people to draw what they wanted from a radio. I went around persuading people to tell me about the radio they wanted. Sometimes I drew it for them, and sometimes we got them to draw it themselves, with a few little props (outline of a radio, some stickers for buttons and dials, speakers and lights). Among the many lovely ideas, this is my favourite (by Paul Downey): 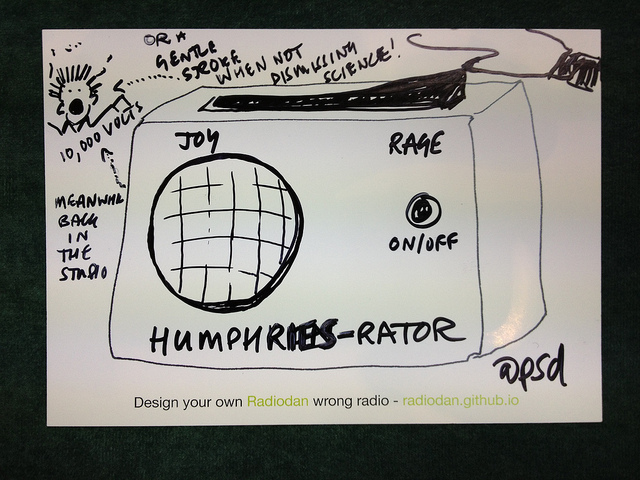 When you explain the Archers Avoider, ask people to think about physical radios, and give them this set of simple tools, they say “oh!”, and then they say “my radio would do this: ….” and tell you. We soon had dozens of them.

A couple of years ago, I talked[1] about a “Cambrian Explosion”[2] of radios based on these postcards, from which we could choose the “best” ones:

This is a kind of shuffled, messy product-space, a bunch of different features and ideas with no structure and no systematic way of exploring it.

Richard Pope’s mind-expanding blog posts Product Land part 1 and part 2 (which you should read), suggest a more structured approach to exploring this space, by figuring out the dimensions of the product and then exploring different points in that space. I think we are taking different approaches to the same problem. Richard writes:

“My proposition is that digital products are also inherently complex and inherently multidimensional, that design is too often constrained by our methods of thinking about them and too often risk being either derivative or simple iterations of variants as a result; or worse, user needs are never met as well as they could be because we are looking for solutions in the wrong place.”

There is an argument that radios just do a job and do it well. The postcards people made say something else:

There are lots of potential features of radio that people would enjoy that don’t exist.

Many won’t be viable in the slightest, but some might be, and we can’t build them – whether as a physical device or in an app – if they aren’t part of what we consider to be part of the “radio” class of products. As Richard puts it:

“You can’t build what you can’t think of in the first place.”

There’s also a genuine, interesting, argument about accessibility here. If you don’t ask a wide range of people what they want from a device, you probably won’t be able to guess what it is they want or need. The postcards surprised us. We were getting slivers of light into bits of the product space for radio that we hadn’t considered.

Finally to the Overton Window

The Overton window is the current frame of reference in politics, the range of ideas that the public will accept, which determine the viability of policies electorally. Currently, Jeremy Corbyn is held to have shifted the Overton window in the UK to the left, from (a) to (b) like this[3]:

Radiodan is a little like the Jeremy Corbyn[4] of radio devices.

We were using mechanisms to try and expand the acceptable range of what constituted a radio by peering into a messy product space and then translating what we saw into prototypes.

I’ll write about the prototypes we made in part 2.

Thanks to many people for reading drafts of these posts: Damian Steer, Dan Brickley, Richard Sewell, Dan Nuttall, Andrew Nicolaou, Tristan Ferne. All errors and poor analogies are mine.